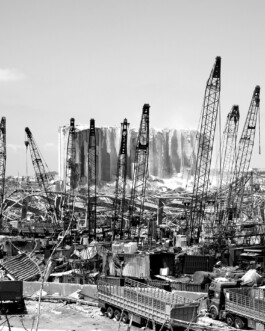 On 4 August 2020, a large amount of ammonium nitrate stored at the port of the city of Beirut exploded, causing at least 204 deaths, 6,500 injuries, and US$ 15 billion in property damage. In that moment, the Heart Directors Club was born, I just didn’t know it yet. Following my instincts I designed a limited Help Beirut. In less than four weeks almost 200 shirts were ordered and I donated 2,200 Euros to the Red Cross who helped on-the-spot.

The money was transferred, Beirut disappeared from the headlines, but something remained: a desire to act using my skills. For the first time I had a sense of being able to make a little change using the power of creativity. Or at least to set the creative forces in action within my tiny bubble.

Only one month after the detonation in Beirut a fire badly damaged the refugee camp of Mória. By 10 September, the camp was almost completely destroyed. Together with friends I created six 42 × 60 cm poster prints to raise some money and donate the proceeds to Seebrücke. Heart Directors Club was the first name that crossed my mind. Considering the Art Directors Club Festival where advertising people basically award themselves for doing night shifts. HDC doesn’t praise for success, it focuses on the forward thinking creative part of the job.

We donated a couple of 100 Euros and tasted blood. From now on every month I organized a limited edition featuring different designers and artists who created artworks, posters, shirts or scarves and raise thousands of Euros for good causes.

The club was started by an emotional and mindless enthusiasm. After some months I realized that I’m not happy with the way it works: rather than selling stuff and donating money I saw a deeper value in the approach of doing „something good“. I rather wanted to represent the people and ideas so I decided to transfer HDC more into a content platform than a charity project. From summer 2022 on Heart Directors Club is your place for design that matters — in any possible ways.